It’s time for another customer story, where we take a look at just one of the many staircase refurbishments that we have recently worked on.

Having built their own home back in 1998, their house was hugely sentimental to them. “We found the plot of land and fell in love with the views,” they explain. With their house overlooking a beautiful Welsh valley just outside Newport, it’s easy to see why.

However, having built the house quite a few years back, the interior needed updating and the Penfolds decided they wanted a bespoke staircase as the focal point of the hallway. 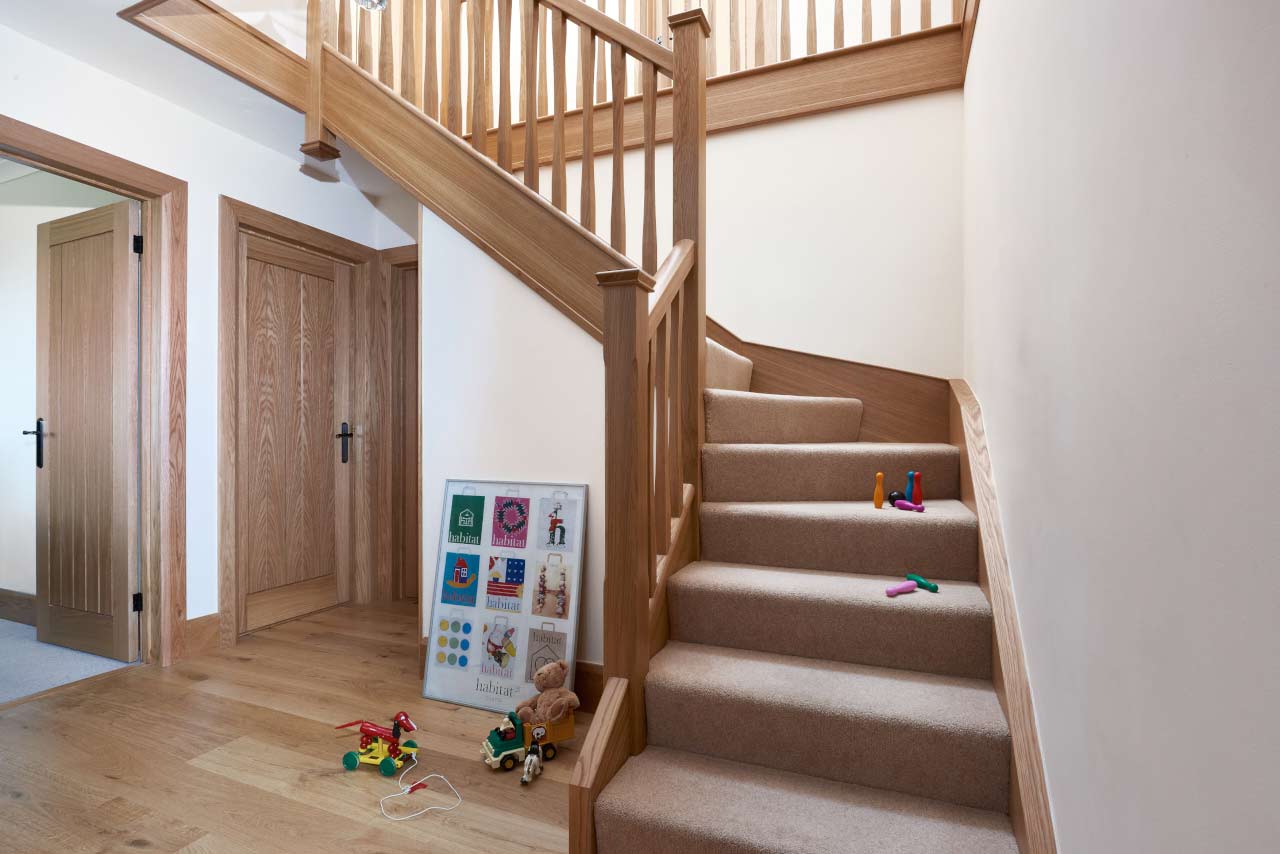 “When we bought the house we were on a different kind of budget and opted for pine – everywhere! This was also the style at the time,” explains Mrs Penfold who went on to comment on how the pine had weathered to an orange hue over the years. “We were forever saying we’d like to rip it all out and start again… so one day, that’s exactly what we did!”

Out with the old

The Penfold’s replaced the original pine staircase with a modern oak staircase for a more contemporary look. They also gave the internal doors, skirting and architraves a whole new look with matching oak. “It would have looked odd to keep the pine everywhere else and we were so desperate to get rid of it that we wanted to complete the new look.” 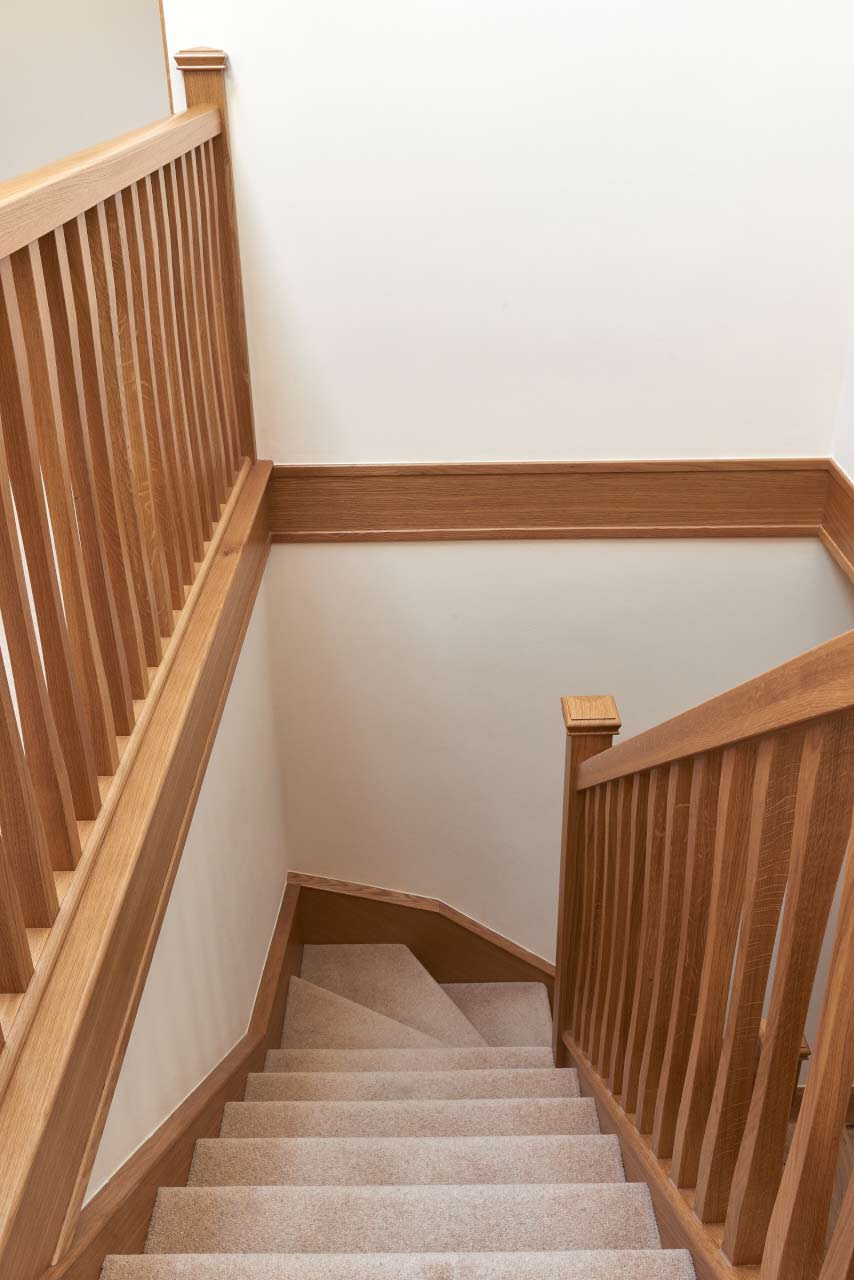 The couple also opted for polished black chrome door handles. “We wanted plain black but loved the option of the chrome finish – it added something extra to the look.”

The Penfold’s kept their original staircase frame, using the oak to update it and also stabilise the original design which wasn’t fixed to the wall securely. The addition of a stylish cream carpet creates a soft look which is in keeping with the Penfold’s classic and sophisticated interior taste. 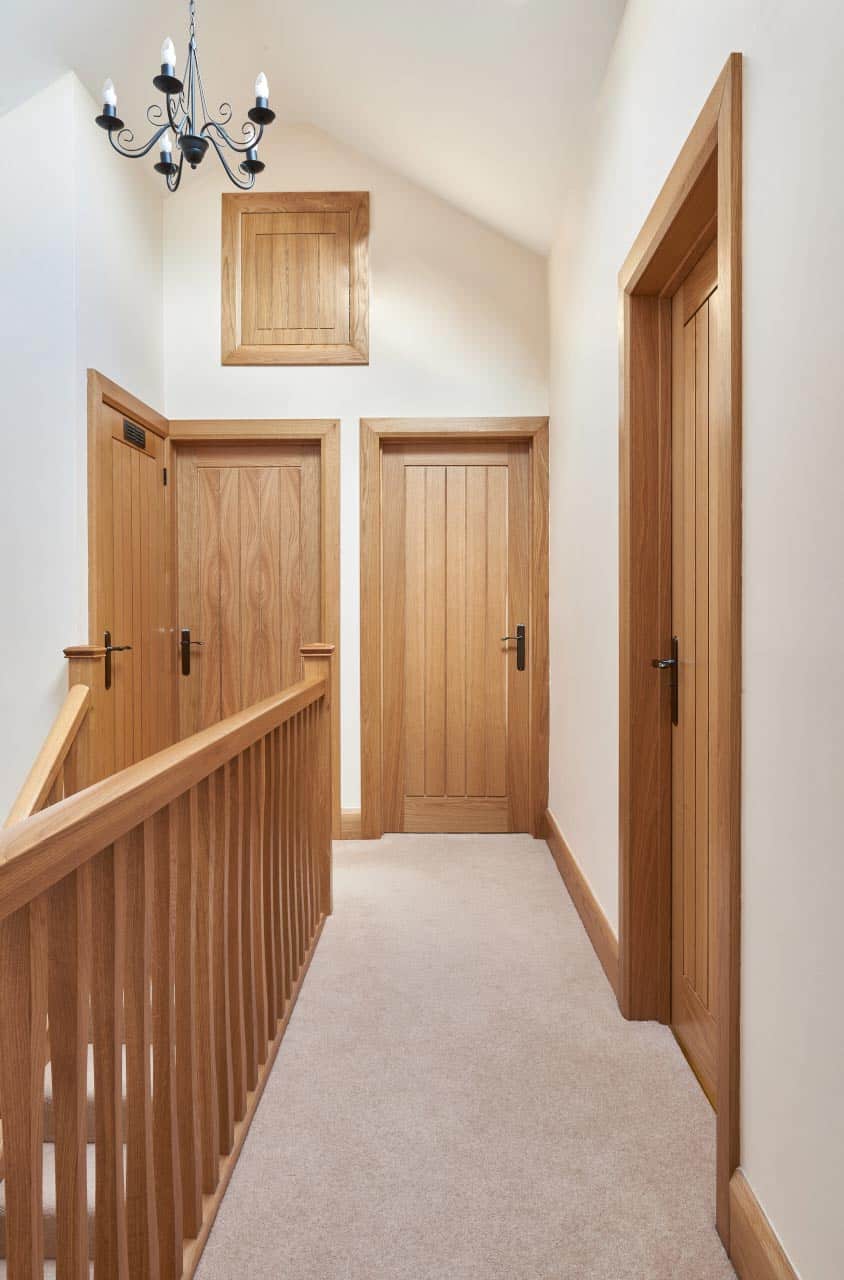 More than a staircase

When asked about the Jarrods approach, the Penfolds were more than complimentary.

“Not only did Jarrods create a new staircase for us based on the original design but they also installed 17 new doors throughout the house, including building a tricky door for the boiler which was misaligned on the wall and needed ‘bringing out’. We didn’t realise at the time what a difference it would make to the overall neatness and look of the upstairs landing!” 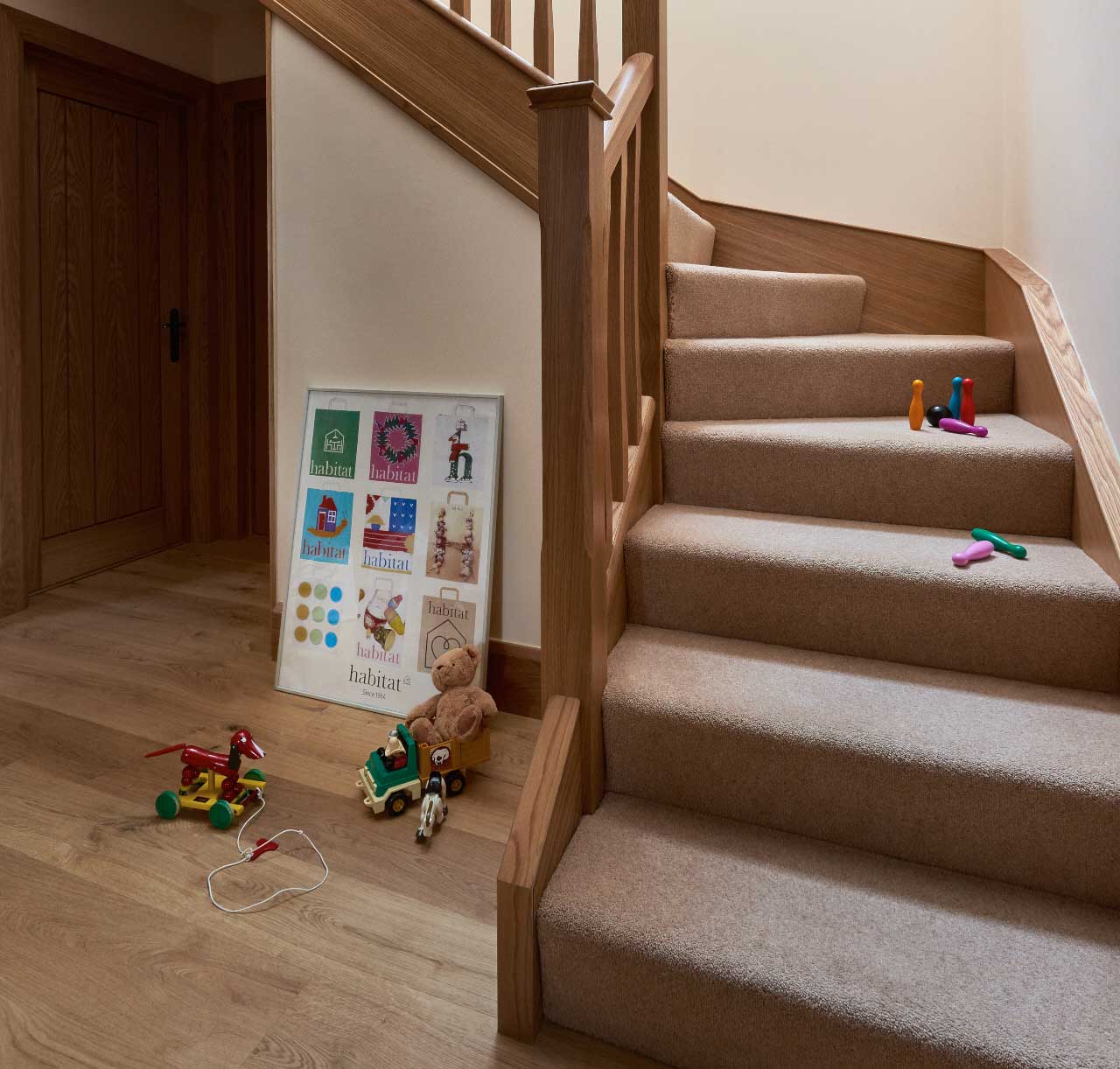 “Working with Jarrods was a very personal and thorough process. They made us think about aspects of the design process such as the detail of newel posts and caps that we wouldn’t have otherwise considered,” they said.

“When we started doing our research online, Jarrods were the only company that would do everything from the staircase to doors, skirting and architraves.” 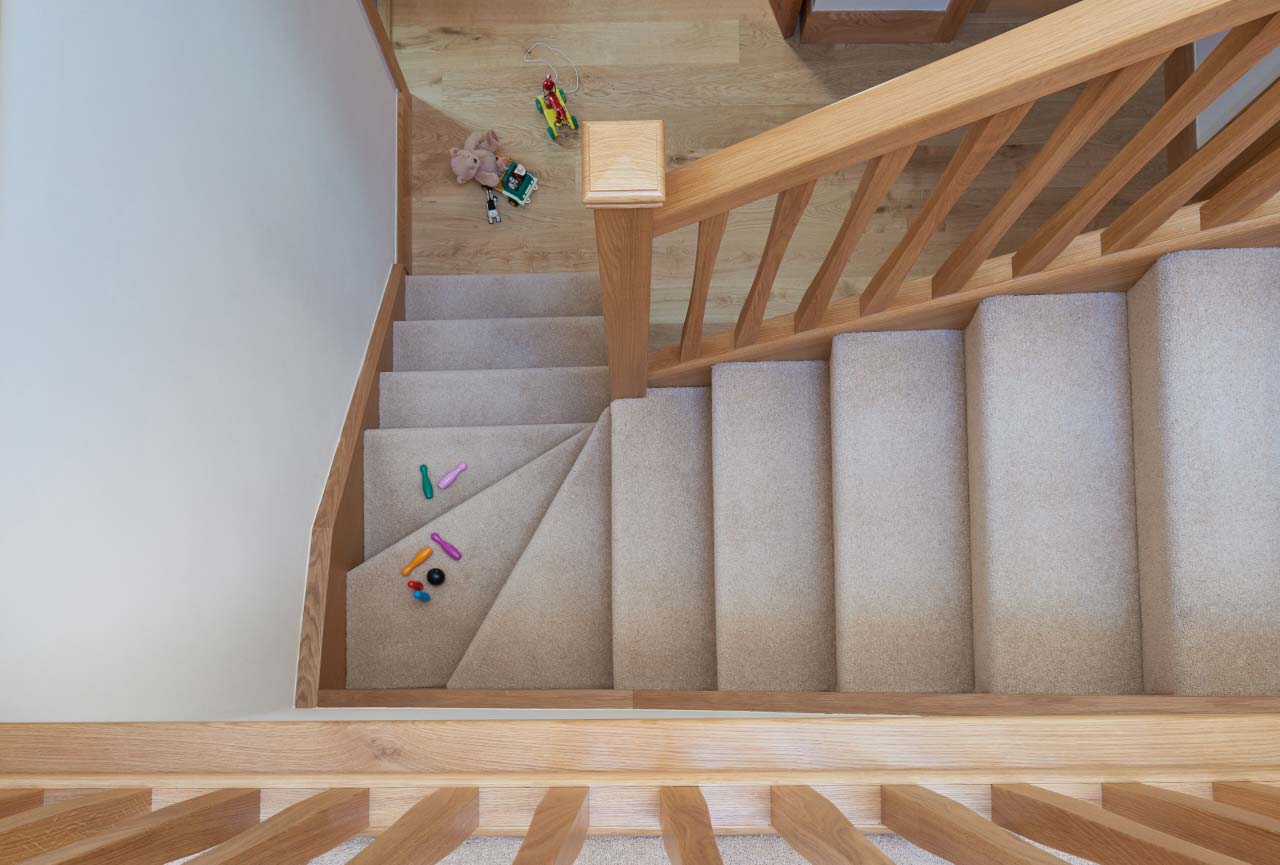 “When it came to the installation they were here nine days in total and we couldn’t fault one part of their service – they barely even stopped for lunch; starting at 8am and leaving late every evening! In fact, our neighbours even commented that they had never seen tradesmen work so hard! We also loved the fact that right throughout the installation process they constantly asked our opinion on things.”

Thanks so much for the kind words, it was a pleasure to work with the Penfolds on their stunning new staircase.

If you’re feeling inspired by Mr and Mrs Penfold’s experience, get in touch today to see how we can bring your dream staircase to life.